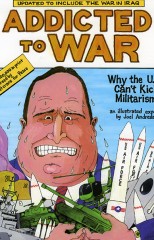 JOEL ANDREAS began following his parents to demonstrations against the Vietnam War wh ile in elementary school in Detroit. He has been a political activist ever since, working to promote racial equality and workers' rights inside the United States and to stop U.S. military intervention abroad. After working as an automobile assembler, a prin ter, and a civil engineering drafter, he completed a doctoral degree in sociology at the University of California in Los Angeles, studying the aftermath of the 1949 Chinese Revolution. He now teaches at Johns Hopkins University in Baltimore. Addicted to War is Joel's third illustrated exposé. He wrote and drew The lncredible Rocky, an unauthorized biography of the Rockefeller family (which sold nearly 100,000 copies) while a student at Berkeley High School in California. He also wrote another comic book, Made with Pure Rocky Motmtain Scab Labor, to support a strike by Coors brewery workers. ...