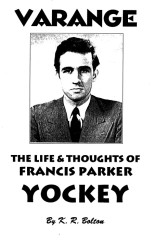 INTRODUCTION. Francis Parker Yockey is the philosopher of the 21"' Century in the same world historical manner as Rousseau and Voltaire werethe historians ofthe 181h Century; Marx, Freud, Darwin for the 19th. In Yockey's Jmperium the Western Destiny Thinker and activist bas the answer to Marx's Kapital, and to the myriad tomes of other economie theorists, Freudian analysts, darwinian free-market evolutionists; ghosts of the !9th century who have continued to haunt the entirety of the 20th, interrupted only by the brief revolutions wrought by Fascism and National Socialism. Y ockey, beginning where Spengler ends, utilises the cyclic analysis of history - the flowering and fall of civilizations in organic mann er; to which Y ockey added his concept of "culture pathology", which includes "culture parasitism", "culture distortion", and "culture retardation". These terms refer to the manner various alien intrusions infect the course of a civilization and divertit from its organic destiny or life's course.; just as a tree might be stunted from maturity by strangulation from weeds. In the case of Western Civilization, according to Yockey, "culture distorter" is synonymous with the interests pursued by the "Jewish-PeopleNation- Culture-State", whose interests are at variance with that of the host culture. The West's destiny could only be fulfilled if liberated from the grip of the "outer en emy" and the "inn er traitor" (the Jewish influence and its Gentile tools respectively). The destiny ofwhich Yockey spoke and wrote was that oflmperium- the Empire of Europe. Francis Parker Yockey was born in Chicago on 18th September , 1917 to ·Louis and Nellie Yockey, in a family oftwo sisters and a brother. With an IQ of 170, he was a gifted classical pianist as a lad. Yockey received his B.A. from the Georgetown University School of Foreign Service in 1938, and his degree in law cum laude from Notre Dame University of Law in 1941. Already by 1936 Yockey bad developed ideas which he called European "Imperialism". His ideology was decidedly that of authoritarian nationalism. In 1939 he bad written an article for the popular radio priest Charles Coughlin's Social Justice, a mass circulation paper with pro-fascist leanings. The article, entitled "The Tragedy of Youth" called for a powerful Christian nationalism among the young to resist Leftist influences and to oppose the entry of the USA into any war fought in Europe against Hitler. A gifted speaker, Y ockey spoke at a meeting of William Dudley Pelley's thriving fascist movement, the Silver Shirt Legion of America, in 1939. His 1940 essay, "Life As An Art" displays the broad outline of the ideas he later articulated in his magnum opus lmperium - with references to Spengler, Nietzsche, elitism, hierarchy and the Idea of "Western Empire". In 1942 his acquaintances included Hans Haupt, who was to be executed in the USA during the war as a saboteur; who bad attended meetings of the American First Committee (the antiwar lobby) with Yockey's sister Alice. Despite Y oc key' s opposition to the war against the Axis, he enlisted in the army and was assigned to a G-2 intelligence unit, undoubtedly to do what he could for the cause of Europe from within . Although missing for two months, (and suspected by the FBI of having been on a spy mission for Germany) Yockey was honourably discharged in 1943. After setting up a private law practice, Yockey somehow obtained a position with the War Crimes Board, and went to German y with the US prosecution team to try second string Nazis at Wiesbaden. "Undoubtedly his motive was to help out sorne of the people on trial", stated Yockey's principal post-war Arnerican colleague, H. Keith Thompson, in a 1986 interview. Yockey defiant, playing German anthems on the piano at the officers club, and after a confrontation with Justice Jackson he was fired. From then on he was marked by the FBI and the various branches of military intelligence, all of whom were to have a difficult time keeping track ofYockey over the course of the next 15 years, accumulating a file of over a thousand pages by the FBI atone. In 1947 the US Army Counterintelligence Corps raided Yockey's home in Germany, but Yockey bad already gone. He turned up next in Ireland, at a remote inn in Brittas Bay, where over the course of six months he completed his materwork Imperium, under the pseudonym Ulick Varange. ...