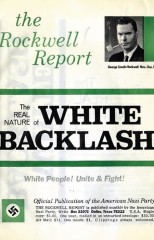 Official Publication of the American Nazi Party. History will record that the Black Man in America was the final cause of the Jew's undoing. It all started with money, as is typical of most Jewish operations. One of the first and only places in America to inaugurate "religious freedom" was Newport, Rhode Island. (The "American Dream", as the love-mongers like to call our tradition, was anything but "tolerant" and "full of "love". in most Amercian colonies, the slightest religious heresies were punished with banishment or cruel death.) ...