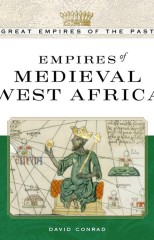 Introduction. THE GEOGRAPHY OF NORTHWESTERN AFRICA HAS SHAPED its history in dramatic ways, starting with the Sahara Desert—an extremely important geographical feature in the history of the three great medieval African empires described in this book. Rock paintings found in mountains of the Sahara reveal that until about 5000 B.C.E. the region that is now the largest desert in the world was a land of rivers and lakes populated by hunters and fishermen, grassland animals such as rhinoceros, elephants, and giraffes, and aquatic creatures including hippopotami, crocodiles, and fish. As the centuries unfolded, the region became increasingly dry until the aquatic creatures were gone, and herders appeared with domesticated cattle. By around 3000 B.C.E. the region had begun to resemble what would eventually be known as Sahara, the Arabic word for “desert.” Rock paintings from this period show that the big game animals were gone, having retreated north and south to wetter climate zones. Many of the human inhabitants also moved northward into the Maghrib, which is what the Arabs called northwestern Africa, the location of modern Morocco and Tunisia with their shorelines on the Mediterranean Sea. Although it became increasingly difficult to survive in the Sahara, many people stayed there. Some of them settled in oases—areas in the desert with springs and wells that enabled them to cultivate date palms and vegetable gardens. Today, the population of the Sahara is still about 2.5 million. In addition to people living in the scattered oases, there are large communities that occupy the desert fringes in all four directions. The southern regions of the western desert are the lands of the nomadic Sanhaja and other groups of Berber peoples (caucasian peoples of northwestern Africa) who, as we shall see, were important participants in the history of the great empires that developed below the desert. The Sahel On the southern fringe of the Sahara is the Sahel, a marginal area of transition from desert to savanna. Sahel is the Arabic word for “shore.” It is as if the Sahara were a great ocean of sand and rock, the camels that transport goods across the desert were ships, and the large market towns were seaports. Nowadays the Sahel is semi-arid, with more irregular rainfall and cycles of drought than the savanna grasslands. As beasts of burden, camels are almost as important in the Sahel as they are in the nearby Sahara. During the period from about 1000 B.C.E. to about 1000 C.E., however, the Sahel had a wetter climate. There was enough grass for pasturing cattle, sheep, and goats, and fertile soil for farmers to cultivate grains such as millet, sorghum, and fonio (a type of millet). In those times it was possible to produce enough of a food surplus to support urban populations. Archaeological excavations in the Sahel have revealed that the Mande people who lived there had organized themselves into small settlements by about 1000 B.C.E. By about 600 B.C.E. there were large villages, and from 400 to 900 C.E. urban centers appeared in several areas of the Sahel. One of these was a place now called Kumbi Saleh, which some archaeologists believe was the capital of the Soninke Empire of Ghana. The Bilad al-Sudan The savanna of sub-Saharan West Africa was first described in writing by Arab travelers and geographers, who called it the Bilad-al-Sudan, meaning “land of the blacks” (sudan is the Arabic word for “black person”). Because of the early use of that Arabic term, the West African savanna came to be called the Western Sudan. The area is characterized by vast grasslands, widely scattered giant trees, seasonal rainfall, and the Niger River with its many tributaries. The relatively fertile soil and grasslands of the savanna made it possible for the early occupants of the Western Sudan to harness their natural resources. They made the transition from basically surviving by hunting and gathering, to more reliable production of food by herding domestic livestock such as cattle, sheep, and goats, and cultivating grains such as millet, fonio, and sorghum. Their production of surplus food led to the development of trade with neighboring peoples. Their mastery of iron for tools and weapons and the later acquisition of horses made it possible for some peoples of the Sudan to field superior armies and dominate others. The economic and military successes of these more powerful groups eventually led to the founding of Ghana, Mali, and Songhay, three of the greatest empires in African history. The Inland Delta Below the Sahel during the period after 5000 B.C.E., the great floodplain of the Middle Niger River became a refuge for populations leaving the desert. Gradually, through the centuries, the Inland Delta changed from a vast swamp into the kind of floodplain that exists there now. It is known as the Inland Delta to distinguish it from the other great delta in southern Nigeria, where the Niger River flows into the Atlantic Ocean. The seasonal pattern in recent centuries has been that after the high water the Inland Delta floodwaters recede, leaving behind a network of small creeks and waterways, and in the northern regions a great many lakes. The Niger River and all the streams and lakes of the Inland Delta support abundant aquatic life, including hippopotami, manatees, and many species of fish. As with the Nile River in Egypt, the annual flood deposits a rich layer of silt that turns the region into an extremely productive agricultural zone. Through the centuries, increasing numbers of farming peoples competed for space in this rich environment to cultivate their food crops, and herders vied for the choicest pasture lands for their cattle. ...