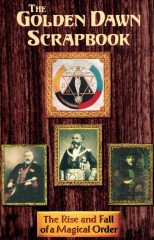 Author : Gilbert R. A.
Title : The Golden Dawn Scrapbook The rise and fall of a magical order
Year : 1997

Introduction. When I first took up the Hermetic Order of the Golden Dawn 25 years ago, it was decidedly a minority interest. Today it is a very different animal: the dead rituals live again, and the system of esoteric knowledge that underpinned them is taught by a multitude of self-styled adepts to myriads of wouldbe magicians who rush headlong, like the Gadarene swine, over the cliffs of self-delusion. But it need not be so. I am not a magician and 1 have no desire to be a Chief, secret or otherwise, of any magical Order, but I am well aware that the warring bands of magicians who variously daim to be the heirs of the Golden Dawn do not represent its true legacy. There are adepts, possessed of the necessary dedication and integrity to revive the Hermetic Order of the Golden Dawn and restore it to the role intended by its Victorian founders: that of a teaching body that unfolds the psycho-spiritual nature of the Self by way of ceremonial practices based on the symbolism of the Western Mystery Tradition. Aspiring magicians will not be led to a working temple through the pages of this book; it is not designed to be a manual or practical instruction. Equally, it is not intended to be a documentary history of the Order: that may be found in Ellie Howe's history, The Magicians of the Golden Dawn (1972), and, on a more modest scale, in my own Golden Dawn Companion (1986). This book is intended simply to provide an overview of the Order, and to tell its story through the lives and actions (or inactions) of its members. If it seems that I have concentrated on their follies and misdeeds, this is because the story of the Order is largely a story of follies and misdeeds. Recent research into collections of Golden Dawn archives has produced an almost complete prehistory of the Onler. In a much abbreviated outline, the story runs like this: William Wynn Westcott (1848-1925), physician, coroner and magician, listed among his recreations 'Freemasonry'- by which he meant not the mainstream craft, but the many odd Rites and Orders that flourished in late Victorian Britain. Westcott was active in most of them, including the Swedenborgian Rite of Freemasonry, of which Kenneth MacKenzie was the Grand Secretary. When MacKenzie died in 1886, Westcott took up his post and collected from MacKenzie's widow all the papers relevant to the Rite, together with sorne 'loose pa pers'. These were nothing other than the Cipher Manuscript. ...