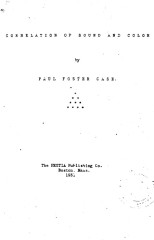 In the order of the Life-power's self-expression, sound, precedes light . A very ancient Sanskrit book tells of Shabda-Brahma, the sound-divinity, which is the root-potency of all manifestation. It says, " Through sound the world stands. " Pythagoras taught the same thing. So did Plato, Both were icstructed by Egyptian hierophents. From them they learned that the physical universe is called forth from chaos by ordered, rhythmic sound. Moses, initiated in the same Egyptian achools, began Genesis with an account of a series of creative acts introduced by the words, "And God said." The Hebrews and the Greeks a like were instructed in a secret wisdom which had for a central tenet the idea that the laws of musical proportion are expressed in all things, When St. John wrote of the Logos, or Creative Word, "Through him all things were made, and that which hath been made was life in him," he simply published openly what had long been transmitted from mouth to ear in esoteric schools. ...