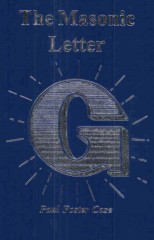 Introduction. Paul Foster Case (1884-1954), author of this treatise, is known to students of occultism as the outstanding authority of Tarot, Qabalah, Alchemy and related subjects of the Western Occult Tradition. His other publications, including The True and Invisible Rosicrucian Order; Tarot, Key to the Wisdom of the Age;. The Great Seal of the United States; The Magical Language; The Book of Tokens, bear witness to his deep insight and wonderfully readable approach to these subjects. The present work makes it clear that his knowledge included a thorough understanding of the Masonic tradition. In it he develops the unmistakable link that exists between the Masonic degrees and rituals and the Qabalistic tradition. He shows that Masonry cannot be fully appreciated or understood without knowledge of the Qabalistic Tree of Life and its insight into the true nature of man and of the Cosmos. One of the outstanding concepts he develops is the relationship between the geometry upon which the building and architectural symbolism of Masonry are based and the Gematria of the Qabalists, which is a system of number correspondences to words and phrases that reveals the inner meanings behind the numbers, measurements and geometrical proportions prominent in both the Old and New Testaments. The contributions of Paul Case to students of the spiritual goes beyond the works mentioned above. He founded BUILDERS OF THE ADYTUM, a non-profit religious organization which disseminates a spiritual training system based on his works in graded lesson form through the mail. It is a system that allows sincere aspirants of the present day to receive training that in past ages was available only to the few who could enter a Mystery school and completely withdraw, at least temporarily, from society and the concerns of the outer world. Paul Case was charged with the responsibility, by a Master of the Inner School, of preserving, extending and updating the Ancient Wisdom that has existed since the beginning of the World. His outstanding contribution is that he has left us a clear, graded system for spiritual development that enables us to fully retain our relationships and responsibilities in the modern world while gradually but surely unfolding insight into the higher ones. ...