Case Paul Foster - The Secret Doctrine of the Tarot 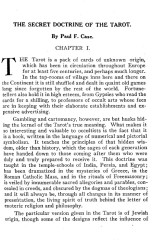 The Tarot is a pack of cards of unknown origin, which has been in circulation throughout Europe for at least five centuries, and perhaps much longer. In the tap-rooms of village inns here and there on the Continent it is still shuffled and dealt in quaint old games long since forgotten by the rest of the world. Fortunetellers also hold it in high esteem, from Gypsies who read the cards for a shilling, to professors of occult arts whose fees are in keeping with their elaborate establishments and expensive advertising. Gambling and cartomancy, however, are but husks hiding the kernel of the Tarot's true meaning. What makes it so interesting and valuable to occultists is the fact that it is a book, written in the language of numerical and pictorial symbolism. It teaches the principles of that hidden wisdom, older than history, which the sages of each generation have handed down to those coming after them who were duly and truly prepared to receive it. This doctrine was taught in the temple-schools of India, Persia, and Egypt; has been dramatized in the mysteries of Greece, in the Roman Catholic Mass, and in the rituals of Freemasonry; is veiled by innumerable sacred allegories and parables, concealed in creeds, and obscured by the dogmas of theologians ; and it will always be, through all changes in its manner of preseritation, the living spirit of truth behind the letter of exoteric religion and philosophy. The particular version given in the Tarot is of Jewish origin, though some of the designs reflect the influence of Christian ideas. The whole pack is constructed according to a plan derived from the Kabbalah, and each card represellts a definite proposition of this ancient Hebrew theosophical system, which tradition traces to Abraham. ...