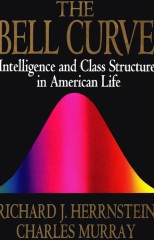 This book is about differences in intellectual capacity among people and groups and what those differences mean for America's future. The relationships we will be discussing are among the most sensitive in contemporary America-so sensitive that hardly anyone writes or talks about them in public. lt is not for lack of information, as you will see. On the contrary, knowledge about the connections between intelligence and American life has been accumulating for years, available in the joumals held by any good university library and on the computer tapes and disks of public use databases. People have shied from the topic for many reasons. Sorne think that the concept of intelligence has been proved a fraud. Others recall totalitarian eugenie schemes based on IQ scores or worry about such schemes arising once the subject breaks into the open. Many fear that discussing intelligence will promote racism. The friends and colleagues whose concems we take most seriously say something like this: "Yes, we acknowledge that intelligence is important and that people differ. But the United States is founded on the principle that people should be equal under the law. So what possible relevance can individual differences in intelligence have to public policy? What good can come of writing this book?" ln answer, we ask these friends and you, the reader, to share for a moment our view of the situation, perhaps suppressing sorne doubts and assuming as true things that we will subsequently try to prove are true. Here is our story: A great nation, founded on principles of individualliberty and selfgovemment that constitute the crowning achievement of statecraft, approaches the end of the twentieth century. Equality of rightsanother central principle-has been implanted more deeply and more successfully than in any other society in history. Y et even as the principle of equal rights triumphs, strange things begin to happen to two small segments of the population. ln one segment, life gets better in many ways. The people in this group are welcomed at the best colleges, then at the best graduate and professional schools, regardless of their parents' wealth. After they complete their education, they enter fulfilling and prestigious careers. Their incomes continue to rise even when income growth stagnates for everyone else. By their maturity, these fortunate ones commonly have six~figure incomes. Technology works in their behalf, expanding their options and their freedom, putting unprecedented resources at their command, enhancing their ability to do what they enjoy doing. And as these good things happen to them, they gravitate to one another, increasingly enabled by their affluence and by technology to work together and live in one another's company-and in isolation from everybody else. ln the other group, life gets worse, and its members collect at the bottom of society. Poverty is severe, drugs and crime are rampant, and the traditional family all but disappears. Economie growth passes them by. Technology is not a partner in their lives but an electronie opiate. They live together in urban centers or scattered in rural backwaters, but their presence hovers over the other parts of town and countryside as well, creating fear and resentment in the rest of society that is seldom openly expressed but festers nonetheless. Pressures from these contrasting movements at the opposite ends of society put terrifie stress on the entire structure. The mass of the nation belongs to neither group, but their lives are increasingly shaped by the power of the fortunate few and the plight of the despairing few. The culture's sense of what is right and wrong, virtuous and mean, attainable and unattainable-most important, its sense of how people are to live together-is altered in myriad ways. The fragile web of civility, mutual regard, and mutual obligations at the heart of any happy society begins to tear. ln trying to think through what is happening and why and in trying to understand thereby what ought to be clone, the nation's social scientists and joumalists and politicians seek explanations. They examine changes in the economy, changes in demographies, changes in the culture. They propose solutions founded on better education, on more and better jobs, on specifie social interventions. But they ignore an underlying element that has shaped the changes: human intelligence-the way it varies within the Ameriean population and its crucially changing role in our destinies during the last half of the twentieth century. To try to come to grips with the nation's problems without understanding the role of intelligence is to see through a glass darkly indeed, to grope with symptoms instead of causes, to stumble into supposed remedies that have no chance of working. We are not indifferent to the ways in which this book, wrongly construed, might do harm. We have worried about them from the day we set to work. But there can be no real progress in solving America's social problems when they are as misperceived as they are today. What good can come of understanding the relationship of intelligence to social structure and public policy ? Little good can come without it. ...