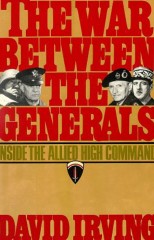 Author : Irving David
Title : The War between the Generals Inside the Allied High Command
Year : 1981

May 10, 1945, two days after the surrender of Nazi Germany. Five generals sit around an oaken table in the Frankfurt headquarters of one of the most powerful men in the world, Dwight D. Eisenhower. On his shoulders are the five stars of his rank as General of the Army. The other four generals have sixteen more stars between them – they are the commanders of the four American armies that, in one spectacular year, have penetrated the French coastline at Normandy, have hurled themselves at the Germans at Avranches, have battled forward through rains and mud and snow to the German frontier, have recoiled under Hitler’s counterattack, and have finally, just three weeks before, shaken hands with Marshal Georgi Zhukov’s troops coming from the ravaged east. Five generals – Eisenhower, Hodges, Patton, Simpson, Patch. Their faces bear the congratulatory grins of men who have done a job they are proud of. But already there are worries clouding the minds of some. George Patton has relished the war, and he fears the peace that is now to come. He actually dreams of using the surviving German divisions in his army sector for a drive against what he now considers the true enemy – the Soviet Union. He is still furious with Eisenhower for restraining him, and for toadying to his particular bêtes noires, the British. The others in the room, while far more temperate, harbour their own grudges, disappointments, resentments. Alliance – with the British and especially the French – has often been an agony. So much misunderstanding, some of it wilful; so much outright hatred. So many decisions that, in the minds of the dissenters, occasioned so many hundreds of thousands of needless deaths. Indeed, the running contest between the Allies on the cruellest issue – whose troops should bear the brunt and thereby perish – has caused deep psychic trauma. These five chiefs and their close colleagues must live their remaining lives with knowledge too fierce to forget. ...