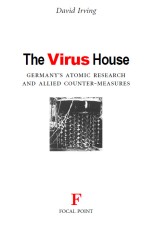 Was there a wartimeGerman atomic research program? It seems hard to believe, for twenty years have passed and there is little reference to it in the established chronicles of the Second World War. In fact, there has up to now been no history of the German atomic research effort between 1938 and 1945, simply because of the thoroughness with which the Allied Intelligence mission under Dr. Samuel A. Goudsmit divested liberated Europe of almost every vestige of evidence that such a program had ever existed. For a historian it would have been - and initially it was - something of a nightmare to piece the story together from such scraps as remained. I can now understand the French Professor Joliot’s feelings when, having insisted that the German nuclear physicists at Hechingen should produce for him every remnant of the uranium metal that they must surely have concealed, he was solemnly handed a lump of uranium the size of a sugar cube that had been used for laboratory tests. (The British and American officers had removed all the documents and uranium from the French zone of Germany even before the war ended.) In the end, I went to the United States and searched for the missing documents there; and I ran them to earth in abundance, lying unused and neglected in a warehouse of the U.S. Atomic Energy Commission at Oak Ridge, Tennessee. I am grateful to Mr. Robert L. Shannon and Mr. James M. Jacobs for their assistance to me there. The most important German files, particularly on the political history, were provided to me by Dr. Goudsmit, to whom I am indebted for his hospitality at Brookhaven National Laboratory, New York; I must also thank his as sistant, Mrs. Peggy Homan, who took care of many arrangements for me during my American investigations. Too many participants in these events have assisted me - in conversations, correspondence, and commenting upon various sections of the draft manuscript - for me to be able to thank them all here. I have named all of them in my Notes on Sources. But three I must particularly thank: Lieutenant-Colonel Knut Haukelid, DSO, MC, who aided me during my researches in Norway into the SOE operations against heavy-water production; Professor Werner Heisenberg, who made time for several very lengthy conversations with me, and who has read the whole manuscript in draft; and Sir Patrick Linstead, FRS, who kindly permitted me to make use of the extensive facilities of the Imperial College physics library in South Kensington. Without their help it would have been exceedingly difficult to present in detail the story that follows. David Irving London, August 1966. ...