Le Bon Gustave - The Study of Races and Present-day Anthropology 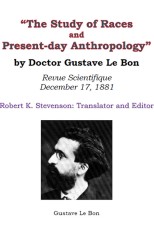 Among the sciences that have drawn the most attention in recent years, one can certainly rank anthropology. Before the revelations we owe to prehistoric archeology and to progress in the natural sciences, the study of man appeared to defy being able to transform itself. By seizing so many marvelous discoveries, a new science undoubtedly opens up for us new horizons. Like Minerva going out wholly armed with the brain of Jupiter, the young goddess—that is, anthropology—will shine with a deep wisdom. To her comes the solution to all those mysterious problems that over the centuries philosophers have in vain exhausted themselves over. The eternal sphinx, having tamed mankind for so long with her magic rod, will at last deliver her secrets. Of all the many expectations evoked by this science from its dawn, what has occurred? For twenty years anthropology has continued its persevering labor. The hour has arrived to ask of it what it has yielded, above all inquiring into what it intends to yet produce. We shall begin first of all by attempting to define anthropology. In appearance this seems easy, but, in reality, it is hardly such at all. If we look to deduce its definition from etymology, we see that anthropology is the science of man; however, this is quite vague. If we wish to take our definition from books, we find indications that are even vaguer. In the first of its articles, the Anthropology Society of Paris restricts itself to saying that anthropology “has for its goal the scientific study of the human races.” Such concise definitions, however, possess a false clarity. In order to obtain a clear idea of their value, one must inquire into what they in reality hide. As a general proposition, one ought not to demand too much for information relating to the limits of a science; whenever this is done, the natural tendency is to usher in very dissimilar things or things which are connected only in a very remote way. For example, a distinguished anthropologist recently maintained that music and sculpture comprise part of the anthropological sciences. Undoubtedly, they are connected just as legitimately as linguistics, demography, and medical geography are, fields which some have also wished to unite. But, anatomy, physiology, chemistry, physics, history—in a word, all that concerns man—it is puerile to fancy that a new science can be formed from what one reassembles from others. If anthropology truly includes, as its disciples maintain, “the ensemble of sciences contributing to the complete knowledge of mankind,” then the best actual anthropology treatise will be some sort of universal encyclopedia. Moreover, all these definitions amount to very little; what we must simply be aware of, I repeat, is what they in reality hide. In researching them we shall easily discover what are the usual subjects of the works of present-day anthropologists. Such research will prove quite easy to perform. It will suffice, in fact, to peruse the Bulletins of the Anthropology Society, the Instructions that it publishes, and the collections that it assembles. The most cursory examination of all these documents shows us from the very first one essential fact. Whereas anthropology in prior days—and this science has not been around all that long—only occupied itself with moral man, present-day anthropology occupies itself with anatomical man, devoting itself to the variations of the body in the various human races. In its General Instructions for conducting anthropological research on the living, the Anthropology Society of Paris does not recommend anything else but the investigation of these variations. The moral, intellectual and social study of peoples seems so outside of the research plans of today’s anthropologists that it did not obtain in the Instructions’ 300 pages a single line of mention. The works of present-day anthropologists, moreover, also mirror the direction indicated by the Instructions, and the collections assembled by these scientists evidence the same tendency. Measurements of skulls and sometimes of skeletons: this is what their research amounts to; meanwhile, the fundamental part of their museums is restricted to displaying and storing collections of skulls and skeletons. ...