« Bernstein Jack - My Farewell to Israel - Diky Andrey Iv. - Jews in Russia and in the USSR » 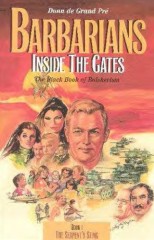 The words and pages and chapters of this book are not written to shock the reader. But they do. Here, for the first time in many decades, is a view of the forces that act on our lives as Americans. Here is a case, complete with impeccable historical references, of plans begun many years ago to control the course of human life on earth. And the plans are a continuum – not easy to envision in the every day life of a people born to, and believing in, personal freedom. This book is a measure by which thinking people can see the gradual reduction of the freedoms that were the promise of our national founders. The author gives us a perspective based on a firsthand knowledge of both time and events, as well as close association with many of the leading characters who willfully assisted the country, our society and its institutions in a downhill spiral leading to the present and ongoing crisis of epic proportions. He was witness to the almost incomprehensible treachery, ineptness and blatant corruption of our chosen leaders, at the highest levels of government, as they dragged this country and its peoples from one unmitigated disaster to another, not only in domestic affairs, but especially in our rudderless foreign policy, which led us blindly into a series of pointless and disastrous no-win wars. What emerged was an almost fatally weakened military force, which has been purposely led astray from its major – and only – mission of defending the constitution, and handed such morale-destroying tasks as humanitarianism, peace-keeping and nationbuilding. As these tragic events unfolded, the deliberate destruction of our culture, morals and mores as a Christian nation was aided and abetted by a subservient and complicit press. While many people will undoubtedly read this book, a far greater number will be unable to read it, for illiteracy is one of the aims of those who would remove the power of individual opinion. For those of us who have good memories, the progress of group control is obvious. The growing power of the shadowy figures who increase their own domain and little by little eliminate the options of individuals is visible to any who will step back and look, compare, measure. The most frightening aspect of the growing power and control over our daily lives is the sincerity of those who wish to exercise it. They believe with a religious fervor that they are better qualified to manage our lives than we are. It has often been repeated that freedom is the unobstructed exercise of options. Conversely, tyranny is the absence of human options. As humans, we came into life on this earth complete with the need to make decisions, to find and to choose between one course and another; one object or another; one person or another; one belief or another. These options are being gradually removed and replaced. That is a measurable fact. The only question remaining is whether it is accidental encroachment or a planned one. Col Donn de Grand Pré thoroughly documents his case that it is planned, that the planners’ direction is historic and unchanging. We must finally recognize that there are those among us who have the human characteristic, the need, to control other humans. We must finally recognize that they span generations and lifetimes. We must finally see them for what they truly are. They have many names; Scribes and Pharisees, the Parsees and high castes of India, the myriad of upper bureaucrats in our own and other government, the one-worlders. These are those who cannot abide individual decisions and actions contrary to group thought, for the excitement of individual action is frightening to them. Their needs are the great warm wombs of group thought, group action. Their violent hostility to any thought or purpose other than mass acceptance is evident to any logical observer. The contest between those who believe in individual rights and actions and those who seek control of other human lives is not a new one. It is an ancient struggle with many dimensions. It is a war between forthrightness and the candor of individual decisions and those who would gain power through stealth and hypocrisy. The forces that act against individual liberty are subtle, gradual, persuasive – and very rewarding to those whose own lack of individual courage and achievement leads them in the group direction. And the pendulum is high on the side of the powercentralizers. Those who purvey group thought, who pretend to believe in the herd mentality, herd wisdom, can win. But the only path for them to achieve victory is one that dehumanizes and degrades others. Therefore their destabilization of the courts, the insistence on mediocrity in public schools, the constant attacks on religious faith should not come as a surprise. That the majority of the media should support these actions is disgraceful in every sense of the word. Thoughtful and honorable people who read this book will discover a wake-up call in Col Grand Pré’s premises and conclusions. Make no mistake about it – this book is the opening shot in a war that individuals must win in order to have our nation and our freedom restored. John F. Williams III Madison, Virginia April 2000. ...

« Bernstein Jack - My Farewell to Israel - Diky Andrey Iv. - Jews in Russia and in the USSR »