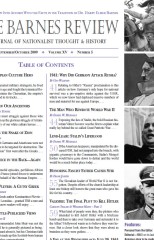 ARMINIUS: EUROPEAN CULTURE HERO BY MERLIN MILLER 4 One of history’s greatest military strategists, he lived exactly 2,000 years ago and fought the tyrannical Romans. Thanks to Arminius the Cheruskan, the empire’s expansion was stopped in its tracks. . . . HIDDEN TRUTH OF OUR ANCESTORS BY DR. INGRID RIMLAND ZÜNDEL 10 Even today we must struggle against those who would hide fromus the glorious struggle ofArminius and the true history of our white culture heroes. . . . GREECE BATTLES THE SNAKE OF ZION BY PETER PAPAHERAKLIS 15 We often forget Germans andAmericans were not the first nations to be targeted for destruction. The “symbolic snake of Zion” first went after the Greeks. . . . WEST STABS GREECE IN THE BACK—AGAIN BY JOHN TIFFANY 20 In several shameful episodes, perfidious Albion and perfidious France joined forces to undermine their Greek allies, on behalf of the Ottoman Empire. . . . KONSTANTINOS PLEVRIS: A GUTSY GREEK A BARNES REVIEW INTERVIEW 26 Remarkable Greek author Konstantinos Plevris— amodern-day Leonidas—grantedTBR a rare and candid interview we know readers will enjoy. . . . JOHN MUIR’S LITTLE-PUBLICIZED VIEWS BY MICHAEL A. HOFFMAN II 33 Famous environmentalist John Muir was not the flaming liberal he is generally pictured as being. You might not have heard about it, but his Christian faith was a key part of whatmade up this Scottish-born human dynamo and cutting-edge conservationist. . . . HITLER DOCUMENT EXPLAINS 1941 ATTACK BY ADOLF HITLER 35 In this address directly to the people of Germany, Adolf Hitler explains why the radical measure of invading the Soviet Union was necessary for the very survival of theWest. . . . 1941: WHY DID GERMANY ATTACK RUSSIA? BY UDO WALENDY 41Relating to Hitler’s “Russia” proclamation is this article on how Germany’s only hope for national survival was a pre-emptive strike against the USSR, which we now know had deployed massive numbers of men and materiel for use against Europe. . . . THE MAN WHO REWROTE WORLD WAR II BY DANIEL W. MICHAELS 44 Exposing the lies of Stalin, the bold Russian historianViktor Suvorov was the first to explain what really lay behind the so-called Great PatrioticWar. . . . LEND-LEASE: STALIN’S LIFEBLOOD BY DANIEL W. MICHAELS 50 If theAmerican taxpayers,manipulated by the diseased FDR, had not jumped into the breach, with gigantic giveaways to the Communists, Stalin’s Mongol hordes would have gone down to defeat and the world would be a much better place today. . . HONORING FASCIST FATHER CAUSES STIR BY FRANK JOSEPH 55 The Slovakian leader of World War II is not forgotten. Despite efforts of the church leadership at least one bishop still honors the great man who gave his life for his country. . . . VALKYRIE: THE FINAL PLOT TO KILL HITLER CAROLYN YEAGER & WILHELM MANN – PART 2 59 What kind of people were they, the plotters who intended to kill Adolf Hitler with a briefcase bomb and then to take over Germany and surrender it to the Allies? Hollywood wants us to believe they were heroes. But a closer look shows that they were about as brainless as they were gutless. . . . A DAY AT THE BENDLERBLOCK: JULY 20, 1944 BY WILHELM MANN 65 The “Bendlerblock,” the military nerve center of Berlin, is best remembered as the center of the botched attempt to overthrow the National Socialist regime of Adolf Hitler on July 20, 1944. It is also where four of the conspirators were executed by firing squad that same night, including the leader, Gen. Olbricht. . . . ...