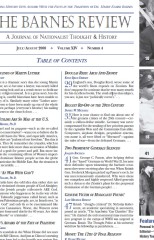 THE LEGENDS OF MARTIN LUTHER JOHN TIFFANY 4 There is a dramatic story that the young Martin Luther, set to become a lawyer, was nearly killed by a lightning bolt and as a result swore to dedicate his life to religion instead. It is a great story, but the only thing is, careful historians have been unable to verify any of it. Similarly many other “Luther anecdotes” seem to have been made up out of the whole cloth, even perhaps (everyone’s favorite) his nailing of the theses to the church door. . . . WHY MUSLIMS ARE SO MAD AT THE U.S. HARRELL RHOME, PH.D. 10 Israel and its puppets—such as the so-called “neo-conservatives”—want you to believe the Islamic world hates the West, and especially America, because they are “jealous of our freedom.” But that is malarkey. They do remember the crusades, which in their eyes were littlemore than an invasion ofMuslim lands and a grab for power and pelf. But more important is the continuing efforts of Western imperialists to dominate Islamic people across the globe and in particular theMiddle East. But the situation is far from incurable. . . . WHO IS ‘AT WAR WITH GOD’? HESHAM TILLAWI, PH.D. 18 Israelis have the odd idea that either they are the victimized chosen people of God Almighty, or that the Jewish people collectively ARE God. Hence, anyone who happens to be in the way of the gigantic Talmudic juggernaut called Israel, such as the hapless Palestinian people, are, in Israeli eyes, “at war with God” and only fit to be exterminated like the ancient Canaanites. Worse, the Western news media have fomented this lie for 60 years. Are these Israelis “Kooks” or criminals? . . . WILSON’S AFFAIRS & THE FATE OF PALESTINE CONRAD GRIEB 25 Sex scandals in the White House did not start with Bill Clinton. And just as Clinton’smessing around may have led to the horrific war against Serbia, the consequences of Woodrow Wilson’s affair withMary Peck were fatal for hundreds of thousands, if notmillions, of innocent people. To a large extent, Wilson’s “peckadillo” with Mrs. Peck caused the emergence of the murderous empire of Israel and all that goes with it. . . . DOUGLAS REED: ARCH ANTI-ZIONIST KNUD BJELD ERIKSEN 29 England’s son, Douglas Reed, wrote some of the world’s finest exposés on Zionism. But don’t suppose for aminute that he wonmany awards for his excellent books. The truth about that subject, you see, is just not “politically correct.” . . . BIGGEST RIP-OFF OF THE 20TH CENTURY DANIEL W. MICHAELS 35 Here is your chance to find out about one of the greatest crimes of the 20th century—certainly a trillion-dollar swindle. Germany was never compensated for the stealing of her priceless patents by the capitalist West and the Communist East alike. Computers, airplane designs, propulsion systems, you name it, all were lifted or “liberated”—against the rules of war—from the defeated Germans. . . . TWO PROMINENT GENERALS SILENCED JOAQUIN BOCHACA 41 Gen. George C. Patton, after helping defeat the “hated” Germans inWorldWar II, became their defender upon witnessing the barbaric treatment they were receiving after the war.When British Gen. FrederickMorgan picked up Patton’s torch, he was unceremoniously transferred. Why were these two outspoken and highly respected Allied generals such a threat to the Zionist’s plans for the perpetual domination of the German people? . . . GENUINE VICTIM OF HOLOCAUST FOUND! LADY MICHELE RENOUF 47 British “thought criminal” Dr. Nicholas Kollerstrom, an academic specializing in astronomy, posted an article, “The Auschwitz ‘Gas Chamber’ Illusion.” He claimed the only intentional mass extermination program in the camps of WWII was targeted at Germans. Result: The Thought Police at his university withdrew his fellowship as punishment. . . . MONEY: THE 12TH & FINAL RELIGION R. DUANE WILLING 56 To certain people money has become a god. And strangely enough, there are warnings about this strange and bizarre religion in such unexpected places as the Bible. Is the legendary Holy Grail also another disguised text that exposes the destructive worship of the god “Moloch”? . . . ...