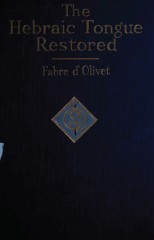 Author : Fabre d'Olivet Antoine
Title : The Hebraic tongue restored and the True Meaning of the Hebrew Words Re-established and Proved by their RadicalAnalysis
Year : 1815

THE HEBRAIC TONGUE RESTORED is a strong appeal to those who, realizing that the time of philosophy is past and the time of religion at hand, are seeking for those higher truths the spreading knowledge of which has already altered the complexion of the world and signalled the approaching end of materialism. In this prodigious work of Fabre d'Olivet, which first appeared in 1815, he goes back to the origin of speech and rebuilds upon a basis of truly colossal learning the edifice of primitive and hieroglyphic Hebrew, bringing back the Hebraic tongue to its constitutive principles by deriving it wholly from the Sign, which he considers the symbolic and living image of the generative ideas of language. He gives a neoteric translation of the first ten chapters of the SEPHER OF MOSES (Genesis) in which he supports each with a scientific, historic and grammatical commentary to bring out the three meanings: literal, figurative and hieroglyphic, corresponding to the natural, psychic and divine worlds. He asserts plainly and fearlessly that the Genesis of Moses was symbolically expressed and ought not to be taken in a purely literal sense. Saint Augustine recognized this, and Origen avers that "if one takes the history of the creation in the literal sense, it is absurd and contradictory." Fabre d'Olivet claims that the Hebrew contained in Genesis is the pure idiom of the ancient Egyptians, and considering that nearly six centuries before Jesus Christ, the Hebrews having become Jews no longer spoke nor understood their original tongue, he denies the value of the Hebrew as it is understood today, and has undertaken to restore this tongue lost for twenty-five centuries. The truth of this opinion does not appear doubtful, since the Hebrews according to Genesis itself remained some four hundred years in Egypt. This idiom, therefdre, having become separated from a tongue which had attained its highest perfection and was composed entirely of universal, intellectual, abstract expressions, would naturally fall from degeneracy to degeneracy, from restriction to restriction, to its most material elements; all that was spirit would become substance; all that was intellectual would become sentient ; all that was universal, particular. According to the Essenian tradition, every word in this Scphcr of Moses contains three meanings the positive or simple, the comparative or figurative, the superlative or hieratic. When one has penetrated to this last meaning, all things are disclosed through a radiant illumination and the soul of that one attains to heights which those bound to the narrow limits of the positive meaning and satisfied with the letter which killeth, never know. The learned Maimonides says "Employ you reason, and you will be able to discern what is said allegorically, figuratively and hyperbolically, and what is meant literallv." HARTFORD, CONN. October, 1918. NAYAN LOUISE REDFIELD. ...