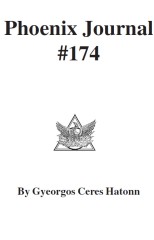 CHAPTER 1. THE NEWS DESK by Phyllis Linn 5/3/96. kacyznski cabin in montana. LOTS OF EVIDENCE FOR SUCH A TINY CABIN! This cartoon says it all, substantiated by this line from a recent issue of THE ORLANDO SENTINEL, (quoting:) The arrest itself took only moments. Now comes weeks of painstaking, unglamorous laboratory work to determine—with certainty—whether the TUCKLOADS OF EVIDENCE taken from Theodore Kaczynski’s remote (and small 10’x12') Montan cabin like him to the 17-year string of Unabomber attacks. MALNUTRITION A KEY TO MUTANT VIRUSES From the April 17 issue of THE ORLANDO SENTINEL, (quoting:) WASHINGTON—Doctors have long known that malnourished people are more vulnerable to viruses, but new research shows malnutrition can actually help those viruses mutate to become dangerous enough to sicken the healthy, too. Last year, (Dr. Melinda Beck of the University of North Carolina) reported the first such link with nutrition, finding that normal coxsackie mutated to become deadly once inside selenium-deprived mice. Now she has taken that research further, infecting healthy mice with the new strain that evolved inside their malnourished cousins. The healthy mice could fight off normal coxsackie but not the new strain. Selenium isn’t the magical nutrient—it happened in mice who ate too little vitamin E too, Beck will report today at the Federation of American Societies for Experimental Biology meeting here. (And WE are a nation of malnourished people—not because of a shortage of food, but because our soil is depleted of the nutrients needed to produce health-sustaining crops. If this gambit WASN’T designed by the depopulation gang, it certainly does fit well with their plans. This story also serves to divert our attention from the fact that some of the designer viruses are created in laboratory boutiques!) She genetically tested the virus in four different experiments to see if the evolution was random, but the same six mutations occurred every time. People probably experience the same effects, as do other viruses, said virologist Dr. Stephen Morse of Rockefeller University. If so, it would mean that catching a virus from the person sitting next to you could be a lot more dangerous if that person were malnourished— even if you were healthy. ...