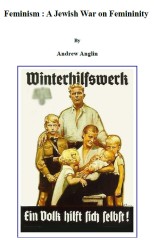 Through Feminism, the Jew attacks the core, primal identity of the female, weakening society by disallowing women to be who and what they are: caregivers. Though weak natured and pathetic men have often framed feminism as an attack on males and masculinity, I assert that it is in reality a direct attack on femininity and the female identity. The very core nature of the human female has been obscured and vilified by the Jews who conceived and led this movement, and this has been one of the largest factors contributing to the fallout of Western civilization. In order to restore natural law to society, the female will have to be strengthened, and the only possible way to do this is to reestablish the feminine identity by dissolving the Jewish doctrine of feminism. The premise of feminism is that females had been oppressed by males throughout the entire history of the human race. This should have struck all people as patently absurd, but through clever, emotion-based propaganda, the Jews were able to garnish wide support for this insane assertion. The Jewish racial “equality” movements were based on the ridiculous concept that “race does not exist,” just so the gender “equality” movements asserted that “gender is a social construct.” This Marxist doctrine cannot be viewed as anything other than a war on the Natural Order. What is a Woman? The human species, not too terribly long ago, existed in balance with the natural world. We lived in tribes, hunting and farming our food. Like all other species on the planet, the most base drive, beyond self-preservation, was the propagation of our genes. Within this order of nature, it was necessary for males and females to take on variant roles in society, due to their variant physical forms. It was impossible for a man to birth a child, just as it was impossible for a woman to spend days fighting the elements hunting, or fighting in a war over resources with a neighboring population. Because of these variant roles, which resulted from the variant physical characteristics, the sexes maintained variant psychological make-ups and definitively variant identities. Absolutely nothing about our biology has changed, but still the Jews, with their doctrine of cultural Marxism, actually expect us to believe that none of this matters anymore, simply because it is now possible, due to technology, for a woman to provide herself with food and shelter without the assistance of a man. ...