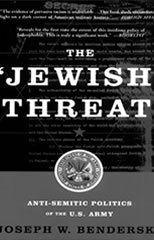 Prologue. The Jewish Files. On MAY 2, 1919, CAPTAIN JOHN B. TREVOR sent an urgent request to the director of military intelligence in Washington under the title “Plans for the Protection of New York in Case of Local Disturbances.” To underscore its gravity, he followed up with a telephone call from his military intelligence office at 302 Broadway. In the hysterical atmosphere of the Red Scare just beginning to spread across America, Trevor was convinced that a Bolshevik revolt was imminent in his home city of New York and that “the force available is utterly inadequate to meet a serious uprising in the congested district.”’ Fearing local troops would be “overwhelmed by a great superiority of numbers,” Trevor sought “prompt action” from headquarters. The expedited response from Washington the next day alleviated some, though not all, of his mounting anxiety. The good news was that “6,000 Springfield rifles” had already been shipped from Augusta, Georgia. But he had also asked for machine guns, which he intended to organize “into a Machine Gun Battalion with two motor trucks capable of carrying eight guns and crews.” The probable deployment of the desired Machine Gun Battalion was in the area he identified as “most strongly permeated with the Bolshevik movement.“2 These particular sections of New York were clearly outlined on the secret “Ethnic Map” Captain Trevor had drawn up months before. Pondering these areas of the city, he easily visualized the threat in human form-for he had encountered them personally in the streets for decades and had kept them under intense surveillance for more than a year. Outsiders, alien in appearance, language, and behavior, they threatened, in his mind, not only his country’s heritage, culture, and political institutions but the continued predominance of the very race that had created and maintained advanced civi lization itself. And these sections of Trevor’s “Ethnic Map” specifically denoted “the congested districts chiefly inhabited by Russian Jews.“3 The very day of his request to Washington, Trevor’s secret agent had again confirmed that radical gatherings were “90% Jewish.” Accordingly, “it would be eminently desirable,” Trevor had notified headquarters, “to have sufficient force available to enclose the area and localize the outbreak.” ...