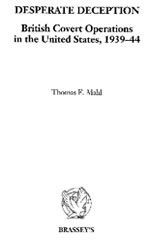 Foreword. Brassey’s Intelligence and National Security Library is intended to provide citizens, students, scholars, and national security experts with a select set of books that make a unique or significant contribution to understanding the world of intelligence. The intelligence literature contains much discussion but few studies of covert action— the secret influencing of events in other countries without revealing one’s involvement. Much of the focus has been on sensational paramilitary activities, and most of this has been about failures. There has been little detailed study of other aspects of covert action. Desperate Deception helps fill the gap. It is a very readable account of British covert action in the United States in the years just before and during World War II. Faced with the growing prospect of war with Germany, the British government mounted in 1939 a massive secret political campaign in the United States (including the use of front groups, agents, collaborators, manipulation of polling data, involvement in election campaigns, etc.) to weaken the isolationists, bring the United States into the war, and influence U.S. war policy in England’s favor. This campaign helped change not only the course of World War II but also the face of American politics in succeeding decades. While bits and pieces of the story have been told before and some of the details of the British campaign are lost to history, this is probably the best-researched and bestdocumented account we are likely to see on this crucial period of Western history. It is also a well-written story that combines both journalistic and academic skills. Desperate Deception is a milestone book on covert action and intelligence. Roy Godson. General Editor. Brassey’s Intelligence and National Security Library. ...