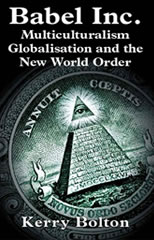 Foreword. The New True Enemy. If a book is a tool that brings affective forces into the world, then one may measure a book by its strengthening or weakening affects; by whether or not it makes possible the will to attack one’s enemies and to defend one’s people; by how much purpose and resolve it provides those in the thick of a life and death struggle; and by how much “territory” it liberates from one’s enemies. In light of these criteria, Dr. Kerry Bolton’s Babel, Inc. : Multiculturalism, Globalization, and the New World Order has the potential to be truly explosive. Babel, Inc. continues the critical analysis that Dr. Bolton began in Revolution from Above (2011). But whereas that book on the close bonds between the power structure of global capitalism and supposedly oppositional Marxist ideologies and movements gave the reader a sense of distance - as if reading about the machinations and absurdities of an alien species - this book does not afford such a luxurious feeling in the reader. In fact, it affects a changing wind and a reappraisal of the forces aligned against the contemporary Right and the world’s peoples and traditions that face certain extinction. For while it has long been common to read Rightist ruminations on race, immigration, and even ethnological characteristics, only recently has the Right devoted much critical thought to capitalism and the liberal State. Bolton, in his characteristically energetic style, not only makes it possible to know how the United States and its neoliberal allies are combining multinational corporate Money Power with the contemporary moral and truth regime known as multiculturalism to create a new type of human creature, but he also succeeds in making this arrangement the primary target of Rightist agitation and revolt. For unlike the Left, which is utterly complicit in the very State-sponsored liberalism that it purports to oppose, the Right’s anti-liberalism and transvaluational tendencies have allowed it to remain free of the sense-and-capital making apparatuses of the liberal State. Despite this freedom, though, the Right has said very little about the State or capitalism. Perhaps this is because both are darlings of Marxist ideologues, or because the Right has always been fond of nationalism and Statism and weary of homo economicus. In any case, Bolton has ensured that the State and its capitalist “culture of death” will no longer be ignored. ...