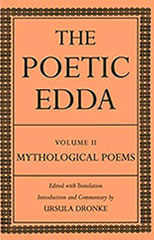 Preface. As the main poems in this volume I have chosen five which are among the greatest of Norse poems and which all relate in some way to the period from the ninth to the eleventh century, when Norsemen were in most familiar contact with the Irish and the Anglo-Saxons. Assimilation of distinct traditions from these neighbour nations is most marked; at the same time all five poems share a mature affinity of style from being conserved as living poetry for two centuries in Iceland. The purpose of this edition is literary to open up for the common reader the delights of the complexities and felicities of the poems and the beauty of the language, and to show the poets' intellectual command of their themes, mythological, religious, and human. To this end I have tackled in commentary and discussion many problems which I know it is not in my competence to solve, in the hope that other scholars may be able to. ...