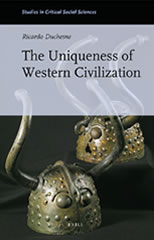 Preface. Th is book has fi ve separate but closely related objectives. First, it seeks to trace the ideological sources behind the multicultural eff ort to “provincialize” the history of Western civilization. It will be argued that the devaluation of Western culture that swept the academic world starting around the 1960s was part of a wider and newly emerging intellectual movement that included the rise of anthropological relativism, critical theory, dependency theory, evolutionary materialism, postmodernism, feminism, and identity politics. Th e second aim is to assess the empirical adequacy of a highly infl uential set of revisionist works published in the last two decades dedicated to the pursuit of dismantling the “Eurocentric” consensus on the “rise of the West.” Th e focus will be on explicating, interpreting, connecting, systematizing, supplying background information, and refuting the arguments of multicultural revisionists who claim that there were “surprising similarities” between the West and the non-Western world as late as 1800–30 and that the Industrial Revolution was the one transformation that fi nally set Europe on a diff erent path of development. Th is book is quite determined in its eff orts to demonstrate that the entire revisionist school is founded on precarious and tendentious claims in its attempts to rewrite the history of the West. Th e questionable pursuit of the revisionist school will be addressed by means of a conscientious analytical and detailed review of a vast body of secondary sources and findings. Th e third objective of this book will be to argue that the traditional Eurocentric historiography on the rise of the West still holds much signifi cance despite the unrelenting criticisms it has faced in the last few decades. Th e standard historiography includes the classical exponents of Europe’s uniqueness as well as contemporary historians and sociologists whose primary interests are directed towards debating the causes of Europe’s ascendancy. In defending their perspectives, this book will also go beyond them by considering numerous additional sources from historians of Europe who have written about Western achievement from the ancient Greeks to the present. ...