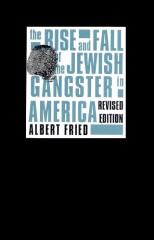 Author : Fried Albert
Title : The rise and fall of the jewish gangster in America
Year : 1993

Albert Fried recalls the rise and fall of an underworld culture that bred some of America's most infamous racketeers, bootleggers, gamblers, and professional killers, spawned by a culture of vice and criminality on New York's Lower East Side and similar environments in Chicago, Cleveland, Boston, Detroit, Newark, and Philadelphia. The author adds an important dimension to this story as he discusses the Italian gangs that teamed up with their Jewish counterparts to form multicultural syndicates. The careers of such high-profile figures as Meyer Lansky, Benjamin "Bugsy" Siegel, and "Dutch" Schultz demonstrate how these gangsters passed from early manhood to old age, marketed illicit goods and services after the repeal of Prohibition, improved their system of mutual cooperation and self-governance, and grew to resemble modern business entrepreneurs. A new afterword brings to a close the careers of the Jewish gangsters and discusses how their image is addressed in selected books since the 1980s. Fried also examines the impact of films such as The Godfather series, Once Upon a Time in America, and Bugsy. Albert Fried teaches American Studies at SUNY Purchase. He is the editor of Socialism in America : From the Shakers to the Third International, and with Ronald Sanders edited a revised edition of Socialist Thought : A Documentary History. Both are available from Columbia University Press. ...