Piper Michael Collins - The confessions of an anti-semite 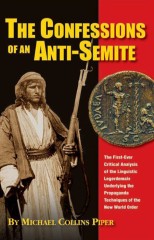 Author : Piper Michael Collins
Title : The confessions of an anti-semite The first-ever critical analysis of the linguistic Legerdemain underlying the propaganda techniques of the new world order
Year : 2011

The temptation is to extend a variety of kudos and acknowledgements to numbers of people who have crossed my paths in the course of my career and contributed to my work, including a few who have become very good friends. And I've also accumulated some remarkable enemies who have, in their own way, also contributed to my efforts. I have already saluted many of those people in my previous published works. ...