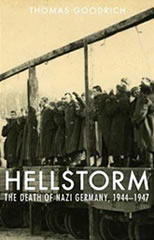 Prologue. On the night of October 20, 1944, the village of Nemmersdorf lay mantled in sleep. Dark and still, only the twinkling of street lamps suggested life in the tiny town. It was now the sixth autumn of the war. The once-mighty German nation teetered at the brink. Her cities lay in ruins, her industry had been shattered, her economy was on the verge of collapse and worse, the Allied armies of the world were locking a death-grip on the very borders of the Reich itself. No one with eyes to see or mind to think could doubt that utter defeat was not only certain, but imminent. And yet, the village of Nemmersdorf slept. For six years now the Third Reich had been mortally engaged in the most violent and cataclysmic war the world had ever known. Millions of Germans were already dead, millions more were crippled or maimed and many others who had survived in tact were staggering toward starvation. And yet, Nemmersdorf slept. The children of the village lay snug, warm and seemingly secure beside their mothers, as they always had and as they imagined they always would; in the bedrooms below, grandfathers, now the only men remaining, coughed quietly in the night, then rose from time to time as they always had for a cup of water, a glass of shnapps or perhaps a quiet moment’s draw on the pipe. Just beyond, in the barns that adjoined most homes, milk cows rustled softly among the hay and fodder. In the dark village square, the old town clock patiently tolled the passing hours as it had night after night, year after year, century after century. Outwardly, at least, and despite a world engulfed in smoke and flame, nights in Nemmersdorf passed peacefully, predictably, as they always had. But that was about to change; all was about to be violently swept away forever. The war, like a wall of angry red lava, was rushing down on the sleeping hamlet and was only moments from arrival. For six hundred years East Prussia had served as the frontier outpost of Germany. Jutting eastward into often hostile Slavic lands, the old Teutonic province, unlike the rest of Germany, had faced a host of real or potential enemies for the entirety of its long existence. As a consequence, a strong military tradition had developed. It was here, in the “Breadbasket of Germany”—a fertile plain of large estates and proud, noble families—that much of the leadership for the German Army, past and present, had come. Thus, it was with no small amount of irony that despite its martial reputation, East Prussia was one of the few spots in Germany that had not been devastated by the current war. While the rest of the Reich’s urban centers had long since been reduced to smoking rubble, the cities and towns of East Prussia, beyond the range of Allied bombers, remained, for the most part, untouched. Although the unscathed condition of the province was envied elsewhere in Germany, Prussians, especially those nearest the eastern frontier, knew better than most that the war was reaching its climax. Each day the rumble to the east grew more distinct; each night the red glow on the horizon throbbed more angrily. By mid-October 1944, the Soviet Army had finally reached the Reich’s border.And yet, as was the case at Nemmersdorf, there was no panic. ...