Hall Manly Palmer - The fraternity of the Rose Cross 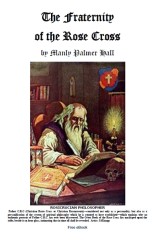 Who were the Rosicrucians? Were they an organization of profound thinkers rebelling against the inquisitional religious and philosophical limitations of their time or were they isolated transcendentalists united only by the similarity of their viewpoints and deductions? Where was the "House of the Holy Spirit, " in which, according to their manifestoes, they met once a year to plan the future activities of their Order? Who was the mysterious person referred to as "Our Illustrious Father and Brother C.R.C."? Did those three letters actually stand for the words "Christian Rosie Cross"? Was Christian Rosencreutz, the supposed author of the Chymical Nuptials, the same person who with three others founded "The Society of the Rose Cross" ? What relationship existed between Rosicrucianism and mediæval Freemasonry? Why were the destinies of these two organizations so closely interwoven? Is the "Brotherhood of the Rose Cross" the much-sought-after link connecting the Freemasonry of the Middle Ages with the symbolism and mysticism of antiquity, and are its secrets being perpetuated by modern Masonry? Did the original Rosicrucian Order disintegrate in the latter part of the eighteenth century, or does the Society still exist as an organization, maintaining the same secrecy for which it was originally famous? What was the true purpose for which the "Brotherhood of the Rose Cross" was formed? Were the Rosicrucians a religious and philosophic brotherhood, as they claimed to be, or were their avowed tenets a blind to conceal the true object of the Fraternity, which possibly was the political control of Europe? These are some of the problems involved in the study of Rosicrucianism. There are four distinct theories regarding the Rosicrucian enigma. Each is the result of a careful consideration of the evidence by scholars who have spent their lives ransacking the archives of Hermetic lore. The conclusions reached demonstrate clearly the inadequacy of the records available concerning the genesis and early activities of the "Brethren of the Rose Cross." ...