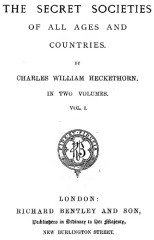 FOR many years the fascinating subject of Secret Societies had engaged my attention and it had long been my intention to collect in a comprehensive work all the information that could be g'athered from numerouSj often remote, and sometimes almost inaccessible sources, concerning one of the most curious phases of the history of mankind—those secret organizations, religious, political, and social, which have existed from the most remote ages down to the present time. Before, however, I had arranged and digested my materials, a review in the " Athenseum" (No. 2196), directed my attention to the Italian work " II Mondo Secreto," by Signer De Castro, whom I have since then had the pleasure of meeting at Milan. I procured the book, and intended at first to give a translation of it, but though I began as a translator, my labours speedily assumed a more independent form. Much, I found, had to be omitted from an original coloured by a certain political bias, and somewhat too indulgent to various Italian political sects, who, in many instances, were scarcely more than hordes of brigands. Much, on the other hand, had to be added from sources, chiefly English and German, unknown to the Italian author ; much had to be placed on a different basis and in another light; and again, many societies not mentioned by Signor De Castro had to be introduced to the reader, such as the Garduna, the Chauffeurs, Fenians, International, 0-Kee-Pa, Ku-Klux, Inquisition, Wahibees ; so that, with these additions, and the amplificar tions of sections in the original Italian, forming frequently entirely new articles, the work, as it now is presented to the English public, though in its framework retaining much of its foreign prototype, may yet claim the merit of being not only essentially original, but the most comprehensive account of Secret Societies extant in EngHsh, French, German, or Italian, the leading languages of Europe; for whatever has been written on the subject in any one of them has been consulted and put under contribution. In English there is no work that can at aU compete with it, for the small book published in 1836 by Charles Knight, and entitled, " Secret Societies of the Middle Ages," embraces four societies only. ...