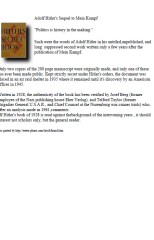 Adolf Hitler's Sequel to Mein Kampf "Politics is history in the making." Such were the words of Adolf Hitler in his untitled,unpublished, and long suppressed second work written only a few years after the publication of Mein Kampf. Only two copies of the 200 page manuscript were originally made, and only one of these has ever been made public. Kept strictly secret under Hitler's orders, the document was placed in an air raid shelter in 1935 where it remained until it's discovery by an American officer in 1945. Written in 1928, the authenticity of the book has been verified by Josef Berg (former employee of the Nazi publishing house Eher Verlag), and Telford Taylor (former Brigadier General U.S.A.R., and Chief Counsel at the Nuremburg war-crimes trials) who, after an analysis made in 1961,comments: "If Hitler's book of 1928 is read against thebackground of the intervening years , it should interest not scholars only, but the general reader. ...