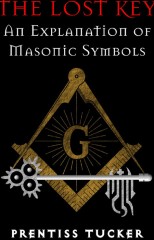 Author : Tucker Prentiss
Title : The Lost Key An explanation and application of the masonic symbols
Year : 1927

Every Mason wants to know the meaning of the rites and rituals, the symbols and ceremonies of Masonry. Although it may have been years since he himself took that mystic journey towards the East and though repeated fruitless searchings may have led him to believe that the rumors of a wonderful philosophy which Masonry contains are pure imagination, yet there still lingers, like the sweet, faint fragrance which clings to old and faded garlands, the thought that, after all, there may possibly be some meaning under it. And, in this intuitional thought or rather hope, he is right. Although he never knew the reason why certain symbolic actions were performed nor could his inquiries, addressed to others, elicit any such information, he feIt that there must have been, at some time; a definite idea upon which the symbolism was based. The various books on Masonic Symbolism confine their attention strictly. to a few of the more prominent symbols and do not take up the ritual itself nor explain why certain things are done and certain actions performed. ...