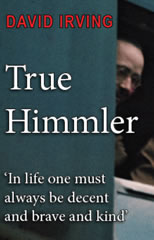 A Murder in Lüneburg. when lived to its full extent, a human life is a mansion of many rooms. That is what Heinrich Himmler had been brought up as a child to believe. But that was then, and this was now. To British eyes he cut a wretched figure, clad in an army shirt, socks, and underpants, and tripping over the grey blanket he clutched around his waist. Soldiers escorted him without ceremony up the six rain-soaked cement steps into the patrician house in Lüneburg in northern Germany, and bundled him into the octagonal front room. It was May 23, 1945. He was still young – only forty-four – but no fool: he may have sensed that this unseemly room, with its nineteenth-century red plush furniture, was the last room of all. Lieutenant-Colonel Michael ‘Spud’ Murphy, who was escorting him, would write that he had brought Himmler over to this house which he had had ‘prepared for such men as Himmler.’ Such men? Underlying the innocence of those few words there was something more sinister. Winston Churchill had himself drafted a secret directive for the Allied leaders to sign, proposing a list of fifty to one hundred Germans of high office, declaring them to be ‘world outlaws.’ They were to be executed immediately upon mere identification. ‘It would seem that the method of trials, conviction and judicial sentence is quite inappropriate,’ he argued, ‘for notorious ringleaders such as Hitler, Himmler, Goering, Goebbels, and Ribbentrop.’ The question of their fate was, he said, surely a political one. Only a few knew of the existence of this secret directive.* What happened next to Himmler is on the official record, and we can briefly summarise it from the words of those involved: Stripped for the second time that evening, naked but for his boots and stocking’d feet, and searched once more for the ubiquitous suicide capsule which all the guiltier “Nazis” were suspected of carrying, he stood in the centre of the room, surrounded by a dozen or so burly British officers and soldiers who offered various excuses to be present. The British Army medic, Captain C J L Wells – ‘Jimmie’ Wells to his pals – was ten years older than the former Reichsführer SS. He began a thorough body-search which needs no description other than that Wells concluded by asking the prisoner to open his mouth. Glinting at the back of the teeth, so he wrote, the doctor thought he saw a capsule with a dot, and he asked the prisoner to step over to the window so he could get a better look. Himmler’s back would thus be briefly turned to every other man in that room except the doctor. The doctor ordered the prisoner to open his mouth again, and tried to thrust his fingers inside to stop him crushing the glass capsule. That was it, the final moment. Himmler snapped his jaw shut and crunched the glass poison phial – wrote Wells; his head fell forward, and his face turned a deep purple. For several minutes the British officers tried to resuscitate him – holding him upside down, forcing his head into a water basin, even (according to Murphy) passing a needle and thread through his tongue to try to haul it out. ...