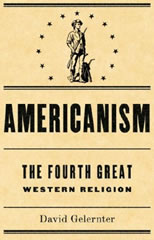 Chapter 1. “I BELIEVE IN AMERICA”. “I believe in America.” Many people have said so over the generations. They are not speaking of a nation. They are expressing belief in an idea, and not just any idea but a religious idea of enormous, transporting power. In this book I will argue that America is no secular republic; it’s a biblical republic. Americanism is no civic religion; it’s a biblical religion. Americanism doesn’t merely announce the nation’s ideals on its own authority; it speaks on behalf of the Bible and the Bible’s God, as Lincoln did in his Second Inaugural Address. Its goal is for America to move forward “with firmness in the right, as God gives us to see the right,” as Lincoln said in that same speech. That America is a biblical republic and Americanism a biblical religion—both facts are perfectly consistent with absolute religious freedom; both are supported by mountains of evidence. So how come nobody knows them? Is the evidence secret? Hardly. But we live in a secular age. No book will change that fact, but our secular prejudice can’t change history either. If we look the facts in the face and don’t flinch, we will see America the biblical republic and Americanism the biblical religion emerge clearly. ...