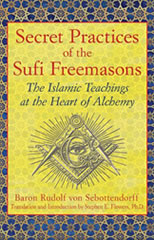 Introduction. You have before you a very strange book. It is a book of secret Sufi exercises based on a particular sect’s teachings about certain sounds, gestures, and the so-called abbreviated letters found at the beginnings of certain chapters of the Qur’an. These exercises are reputed to be able to perfect the spirit of the individual. Furthermore, this particular book was written by a German expatriate and Turkish citizen, who is reputed by some to be the mastermind behind the formation of a political order that eventually became Hitler’s Nazis. You have been warned that you are embarking on a strange adventure. The text of the 1924 book titled Die Praxis der alten türkischen Freimauerei (The Practice of Ancient Turkish Freemasonry) is in itself unusual. Part of its content is well organized, clear, and concise; while other features of it are mixed with elements of a confusing and chaotic nature. The manual could have been even shorter. It really consists simply of a description and schedule of exercises to be conducted regularly over a period of many months. No concrete knowledge is imparted as to what these exercises will actually do for the individual—but it is clearly implied that the reward will be great and that all sorts of knowledge and wisdom will be imparted directly to the practitioner. This book is intended to be nothing more than a translation of Sebottendorff’s 1924 text with some explanatory information about the author, his ideas, and the general spiritual world that gave rise to the exercises. It is not an attempt to add anything new or different to the text, which stands on its own. ...