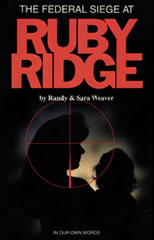 Foreword. By Colonel James "Bo" Gritz. Every now and then the best of government runs amok. On rare occasion the people respond to reestablish their proper master-servant relationship with such a Frankenstein. When they fail, tyranny prevails. 19 April 1775 marks the "shot heard around the world," when soldiers arrived at Lexington to disarm the American militia. In March 1968, the America! Division moved on the Vietnamese village of My Lai. There to protect the populace from Communism, they murdered more than 300 women, children and infants. Another such instance of official abuse began at Ruby Ridge, Boundary County, Idaho in August 1992. A "Special Operations Group" maneuvering to apprehend Randy Weaver, shot 14-year old Sam in the back as he ran for home, having already killed his Yellow Lab, Striker. The ambush team then gunned-down one of its own, as William Degan, the most decorated U.S. Marshal, crossed a burst of fire from a silent sub-machine gun. ...