Kahan Stuart - The wolf of the Kremlin 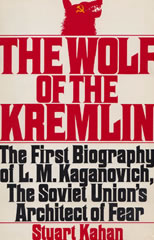 Author : Kahan Stuart
Title : The wolf of the Kremlin The first biography of L.M. Kaganovich, the Soviet Union's architect of fear
Year : 1987

This stunning biography of the man called "the Architect of Fear" under Joseph Stalin is the first book written about Lazar M. Kaganovich. Rich in anecdotal detail and new information, The Wolf of the Kremlin is a close-up portrait of the man who was Stalin's confidant, who set up the amalgamation Qf the state security forces that became the KGB, who personally supervised the deadly purges that ran rampant in the Soviet Union in the 1930s and 1940s, who instituted more restrictions and quotas on the Jews than anyone else, and who caused the death of twenty million people. ...