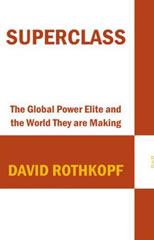 Author : Rothkopf David
Title : Superclass Elite and the world they are making
Year : 2008

Preface to the paperback edition. Turing point for the superclass ? None among the world’s superclass - the most powerful of the world’s most powerful people - have flown higher than the financial elites. No group globalized more rapidly or played a bigger role in fostering globalization. No group more effectively shrugged off the bounds of national regulatory regimes and flourished in the uncharted, unchartable territory above and beyond borders. They helped create great fortunes among themselves and the businesses they served. Their trading desks ran a real-time referendum on national policies that impacted the fate of political leaders as once only electorates or armies could do. The elite of this elite, heads of great financial institutions and funds, billionaire traders and commodity market kingpins, truly strode like titans through the first years of the global era. They have been symbols, examples, empowerers, and beneficiaries of a new system that appeared to concentrate more economic power in the hands of relatively fewer people and that, in the eyes of many, exacerbated the great chasm that separates the haves of this world from the have-nots. And in the year following the hardcover publication of Superclass in the United States, no group was more in the headlines as the financial elites were buffeted by what former U.S. Federal Reserve chairman Alan Greenspan called a “once-in-acentury” financial meltdown. As once powerful financial institutions such as Lehman Brothers, Merrill Lynch,Bear Stearns, AIG, and U.S. mortgage lenders Fannie Mae and Freddie Mac were wiped away, rendered unrecognizable or brought under the wing of the U.S. government, much was revealed not only about the deep flaws in the global financial system but about this important segment of the superclass…and by extension about the nature, power, and importance of the superclass as a whole. When Bear Stearns went into its tailspin in March 2008, it was made clear not only that today’s global markets operated far beyond the reach and understanding of national regulators but also that those same regulators were no longer in the position that they once were to manage crises on their own. ...