« Keyes Ken - The hundredth monkey - Macaba - The road back » 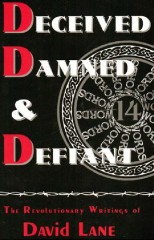 White genocide manifesto. Introduction The format of the White Genocide Manifesto is by calculated intent designed to exclude and ignore the sophistries of establishment sanctioned "authorities." Power systems both religious and secular throughout recorded time have invented and canonized Bishops, Priests, Professors, Historians, Propaganda experts, Word-smiths, Doctors in various alleged disciplines and a host of similar glorified prostitutes, for the specific purpose of befuddling, misleading, controlling and using the masses. Two well known historical figures who fell out of favor after exhibiting rare candor are Napoleon Bonaparte and Henry Ford. Bonaparte after perusing documents from the Vatican library is reported to have said, "History is a fable." Henry Ford after commissioning a group of scholars to investigate the real powers behind governments made the statement, "History is bunk." An author named Trevanian wrote that "The propaganda of the victors becomes the history of the vanquished." The fact is, all power systems rewrite history and propagandize contemporary events for self-serving purposes. Dignifying the deceptions of system prostitutes by quotation, debate or by acceding to use of politically sanctioned terminology only legitimizes their harlotry and opens the doors to endless sophistry. It has long been noted among men of perception that those who have acquired system sanction through so-called "higher education" seem particularly obtuse in accepting circumstances as shown by common sense, and that these "educated" individuals are usually the last to opt out of a corrupt, destructive and tyrannical system. This is so, partially because they have prostituted themselves for personal gain, but also, because higher education is more properly called "advanced brain pollution." The purpose of higher education is to create managers for the masters’ empire. In light of these stated circumstances, the White Genocide "approved" writings. The Manifesto's statements and conclusions come primarily from three sources: Nature's laws, common sense and current circumstances. The present power structure's intellectual masturbation specialists will almost certainly react with the usual specious word games, for sophistry is the only recourse when denying fact. For example, when I state that only around 8% of the earth's population is White, I can foresee from past experience the system prostitutes attempting debate on whether the figure should be 9%, or whether modern Greeks are White, or if there even is a White race. They have a semantic arsenal of deception almost without end. It is self-evidently invalid, political rhetoric. The fundamentals of the White Genocide Manifesto are absolute Truth in spirit, functional in detail and undeniable by men of good conscience and reasonable mind. The Manifesto by design and intent uses time honored terminology in deliberate contravention of politically motivated semantic desecration. For centuries the word "gay" referred to a joyous mood, while the word "homosexual" referenced a sad state of affairs in which the natural role of male to female was abandoned in favor of something which denies nature's intent. For centuries the three major races of the world have been called Negroid, Mongoloid and Aryan, (now called Caucasoid, to mean White, so as to include Jews and other Asiatics). The colored races of the world (comprising over 90% of the earth's population and far more when considering the all important demographic statistic of child-bearing age or younger) are not a minority. Western civilization is the creation of White man, from indoor plumbing and central heating, to more sophisticated inventions such as symphony orchestras, modern communications and anesthetics. The addition of a suffix such as "ist" or "ism" does not demonize a word. Just as a Baptist loves and supports his religion, so a Racist loves and supports his race. The preservation of one's own kind being the first and highest Law of Nature, when the existence of one's own race is threatened, then racism becomes a nature ordained imperative of the highest order. The White Genocide Manifesto does not comply with corruption of language as in the examples given, or to other politically sanctioned but fallacious terminology. The Manifesto attaches little, if any, weight to the statements of political or religious prostitutes from power systems of this or any other age. The best judgment of intent is derived from actions, results and who benefits. Recognizing that no race commits suicide voluntarily, the Manifesto exposes the racial-religious tribe which now rules over the once White countries and which denies the White race not only White countries, but White schools, White neighborhoods, White organizations and everything necessary for survival as a biological and cultural entity. Let it be understood that the term "racial integration" is only a euphemism for genocide. The inevitable result of racial integration is a percentage of inter-racial matings each year, leading to extinction, as has happened to the White race in numerous areas in the past. As the White remnant is submerged in a tidal wave of five billion coloreds, they will become an extinct species in a relatively short time. This genocide is being accomplished by deliberate design. The author of this Manifesto, his comrades, both in chains and out, and others retaining their powers of reason stand in opposition. Zionist control of the media, as well as of all essential power points of industry, finance, law and politics in the once White nations is simply fact and is well known by everyone in positions of influence. For those who doubt, the information is available to diligent researchers through such easily accessed sources as a book called the Jewish Who's Who at a local library or an intelligent perusal of readily available biographies. Unceasing and usually spurious wailings about "anti-semitism" will not change facts. Recognizing that it is the nature of sober and reflective men to accept the dictates or direction of existing governmental and religious institutions, it is imperative that the intent of such systems be clearly identified. When the intent, identified above all else by the effect of existing and ruling institutions, is destructive to a people, then the circumstances must be presented to all men of good conscience. ...

« Keyes Ken - The hundredth monkey - Macaba - The road back »