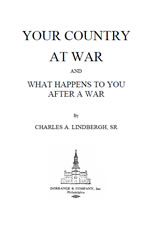 Author : Lindbergh Charles Augustus
Title : Your country at war and what happens to you after a war
Year : 1917

Introduction. On a spring day in 1918 several government agents entered a printshop at Washington, D. C., where the original edition of this book was being printed. “Destroy all the Lindbergh plates in your plant,” they told the head of the institution. He was forced to comply. The hysteria of war-time brooked no delays. Not only were the plates of this book “Why Is Your Country at War ?“ destroyed, but also the plates of Congressman Lindbergh’s book “Banking and Currency,” written in 1913 and attacking the big bankers and Federal Reserve Law. So was the pat painstaking effort of months wiped out. Only a few hundred copies of this book had been printed, and they were sent to Minnesota for use in Congressman Lindbergh’s campaign for the governorship of that state. In 1923 Dorrance & Company issued Congressman Lindbergh’s “The Economic Pinch,” long out of print, as are his other writings, so that the present volume is the only one of Lindbergh’s books available to the American reading public today. Lindbergh transferred the copyright to me late in 1923, when I was associated with him in the practice of law at Minneapolis. We intended to use the book in his 1924 campaign for governor, but death took him on May 24, 1924, and the project was halted. ...