Löser Else - The image of the Germans in Polish literature 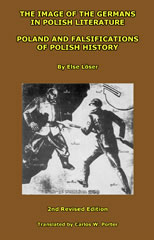 Author : Löser Else
Title : The image of the Germans in Polish literature Poland and falsifications of Polish History
Year : 2013

Dedicated to the memory of the ethnic researcher Dr. Kurt Lück, Posen, in gratitude for his scientific research into the German ethnic national areas of Poland. When I was asked about a year and a half ago whether or not I would consider giving a talk on the subject of Poland – in view of the considerable interest in Poland on the part of the German people and the extent of German assistance programmes to that country – I began to research the “Polish problem” in greater detail than had hitherto been the case. It was not difficult for me to write recollections from my own experience, extending as far back as my earliest childhood and school days, while simultaneously discussing the findings of literature and history. At the request of the listeners, a printed text of my first talk was prepared, followed, some time later, by a further revised and expanded second edition, which has now been superseded by a third. My first talk was followed by many others. Many questions were raised and innumerable letters received, expressing gratitude for my work of enlightenment, with the request that I publish other information, unknown in Germany, which might contribute to a more accurate appraisal of the Polish national character. I wish to comply with that request on the part of interested readers by writing a second part on falsifications of Polish history. ...