Kagan Donald - The peace of Nicias and the Sicilian expedition 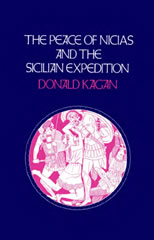 Author : Kagan Donald
Title : The peace of Nicias and the Sicilian expedition
Year : 1981

Preface. This book is the third volume of a projected history of the Peloponnesian War, which I will complete with a fourth volume carrying the story down to the surrender of Athens in 404 B.c. The present book deals with the period from the Peace of Nicias in 421 to the destruction of the Athenian expedition against Sicily in 413. Although the period is generally divided into two parts, as it is in this book, I believe that it demonstrates a basic unity; its tale is of the failure of an unsatisfactory peace. The Sicilian expedition, though not the inevitable result of the inadequacies of the peace, arose from those shortcomings. I believe that the period is further unified by its central character, Nicias, whose policy dominated its first part, whose leadership dominated the second, and whose personality, talents, and flaws were so important for the shape and outcome of both. My purpose in this volume, as in the earlier ones, is to illuminate the course of events by examining the ancient accounts critically in order to reveal, especially, the close relationship between domestic politics and foreign policy. ...