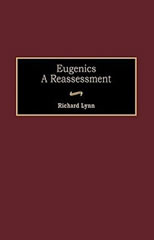 Preface : The General Theory of Eugenics. During the course of the twentieth century a profound change took place in scientific and public attitudes to eugenics. In the first half of the century, virtually all biological scientists and most social scientists supported eugenics, and so also did many of the informed public. In the second half of the centmy, support for eugenics declined; and in the last three decades of the century, eugenics became almost universally rejected. In the history of science there is nothing particularly unusual in the rejection of a scientific theory. This has happened frequently as theories have come to be seen as incorrect and have been discarded. What is unusual is the rejection of a theory that is essentially correct. It is my objective in this book to establish that this is what occurred in the twentieth century with regard to eugenics. ...