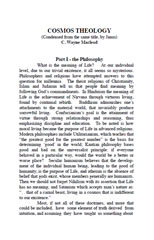 Part I - the Philosophy. What is the meaning of Life? At our individual level, due to our trivial existence, it all seems so mysterious. Philosophers and religions have attempted answers to this question for millennia. The theist religions of Christianity, Islam and Judaism tell us that people find meaning by following God’s commandments. In Hinduism the meaning of Life is the achievement of Nirvana through virtuous living, found by continual rebirth. Buddhism admonishes one’s attachments to the material world, that invariably produce sorrowful living. Confucianism’s goal is the attainment of virtue through strong relationships and reasoning, thus emphasizing discipline and education. To be noted is how moral living became the purpose of Life in advanced religions. Modern philosophies include Utilitarianism, which teaches that “the greatest good for the greatest number” is the basis for determining ‘good’ in the world; Kantian philosophy bases good and bad on the universalist principle: if everyone behaved in a particular way, would the world be a better or worse place? Secular humanism believes that the development of the individual human being, leading to the good of humanity, is the purpose of Life, and atheism is the absence of belief that gods exist, whose members generally are humanists. Then we should not forget Nihilism with its assertion that Life has no meaning; and Satanism which accepts man’s nature as: “. . that of a carnal beast, living in a cosmos that is indifferent to our existence.” Most, if not all of these doctrines, and more that could be included, have some element of truth derived from intuition, and assuming they have taught us something about moral behaviour, can we distill from them the essence of that teaching? Let us take, for instance, the Golden Rule: Do unto others as you would have them do unto you, taught in Christianity, Buddhism and Confucianism. Obviously this has to do with our treatment of each other, as do prohibitions on murder, stealing, cheating, lying and lust for another’s sex partner, while teaching charity, mercy and kindness. Distilled to their essence, they teach the need for empathy and proper behaviour for civilized society, which in turn essentially means cooperative society. A cooperative society means a more complex Life arrangement than individual existence, and therefore we might expect societies requiring empathy and cooperative behaviour to have some relevancy in the evolutionary advancement of human Life. With the knowledge now available from modern studies we can explore this possible connection to moral teaching, but first we must put aside all myth and mysticism, which historically have been the means of spiritual ‘enlightenment’. This rejection comes from our knowledge of Nature, even at the atomic level, for if any divine, omnipotent and omniscient Creator were the cause of everything, surely when we look into the heart of matter we would see evidence of certainty. Instead, we see only probability. On the quantum level, at the very heart of matter, all is probability. But neither does Cosmos Theology affirm atheism, for the evolution of Life suggests possible destiny, as though the human species had meaning even on the scale of the Universe. Ironically, it is only when we reject all mysticism that the full meaning of Life becomes manifest. ...