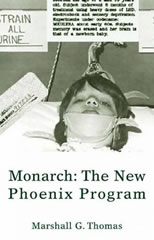 This work is a review of literature on the subject of war crimes pertaining to the use of microwave weapons against civilians. Contributing authors have been given credit through footnotes and in the bibliography. I wish to express my gratitude and appreciation for their invaluable contributions to understanding these ongoing crimes against humanity. ONE : War Crimes. Phoenix Program. The Phoenix Program, created by the CIA in 1967, was aimed at "neutralizing"—through assassination, kidnapping, and torture, the civilian infrastructure that supported the Viet Cong insurgency in South Vietnam. It was a terrifying "final solution" that violated the Geneva Conventions. The Phoenix Program's civilian targets of assassination were VC tax collectors, supply officers, political cadre, local military officials, and suspected sympathizers. Faulty intelligence often led to the murder of innocent civilians, rival Vietnamese would report their enemies as "VC" in order for US troops to kill them. In 1971, William Colby, head of CIA in Vietnam, testified the number killed was 20,857. South Vietnamese government figures were 40,994 dead. CIA officer Ted Shackley managed (600 military and (40-50) CIA liaison officers) who were working with South Vietnamese officers in 44 provinces. Ted Shackley and Robert Komer played key roles in recruiting Phoenix Program personnel. Many Covert Action officers were Cuban refugees from the Bay of Pigs fiasco. They ran the CIA's Counter-Terror (CT) Teams, which were in fact assassination squads. Colby, Komer, and Shackley reported to DCI Richard Helms and the White House. From the beginning the Phoenix Program was conceived by the White House and supported by the CIA. Phoenix called for "neutralizing" 1800 targets a month. About one third of VC targeted for arrest were summarily executed. Green Berets and Navy SEALs would assassinate suspected VC sympathizers or cadres, as well as South Vietnamese collaborators and double agents. In 1982 an Ex-Phoenix operative revealed that sometimes orders were given to kill U.S. military personnel who were considered security risks. He suspects the orders came not from "division", but from a higher authority such as the CIA or the Office of Naval Intelligence. ...