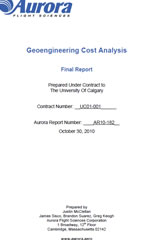 Executive Summary. Geoengineering has been defined as: “the deliberate large-scale manipulation of the planetary environment to counteract anthropogenic climate change.” As Lord Rees, chair of The Royal Society, wrote in the forward to the Society's 2009 report on geoengineering, "The continuing rise in the atmospheric concentration of greenhouse gases, mainly caused by the burning of fossil fuels, is driving changes in the Earth’s climate. The long-term consequences will be exceedingly threatening, especially if nations continue ‘business as usual’ in the coming decades. Most nations now recognize the need to shift to a low-carbon economy, and nothing should divert us from the main priority of reducing global greenhouse gas emissions. But if such reductions achieve too little, too late, there will surely be pressure to consider a ‘plan B’—to seek ways to counteract the climatic effects of greenhouse gas emissions by ‘geoengineering’ … Far more detailed study would be needed before any method could even be seriously considered for deployment on the requisite international scale. Moreover, it is already clear than none offers a ‘silver bullet’, and that some options are far more problematic than others.". Geoengineering may be a means to create a time buffer against catastrophic climate change while long-term emissions reduction actions take effect. One approach is to disperse particulates at high altitude to reduce the effective solar flux entering the atmosphere. Sulfur compounds have been proposed, similar to the compounds emitted during volcanic eruptions that have been found to cool surface temperatures. As shown in Figure 1, the reduction in top-of-atmosphere solar flux is dependent on the quantity of sulfur dispersed per year. Other particulates may also be suitable. This study investigates means of transporting quantities geoengineering payload to altitude and releasing it at specified release rates. A variety of systems including airplanes, airships, rockets, guns, and suspended pipes are examined with a goal of lifting 1 million tonnes to altitude per year; we also evaluate 3 and 5 MT/year for a few delivery systems. Figure 1: Reduction in incoming top-of-atmosphere (TOA) solar flux achieved for a given yearly dispersal rate. ...