McCoy Alfred William - The politics of heroin in Southeast Asia 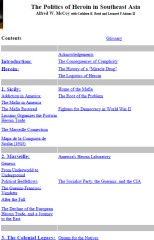 Examining and exposing the true nature of the international heroin traffic has provided interesting copy for. some writers and brushes with dangerfor others. Very early into our research we discovered that there were facts we were just not supposed to know, people we were not supposed totalk to, and questions we were not supposed to ask.But there was a large group of friends who cooperated with us, and we with them, in uncovering the political dimensions of the internationalheroin traffic. There are many persons in Southeast Asia who helped us immeasurably by supplying us with firsthand accounts of incidents andother "inside" information whose names may not be mentioned out of respect for their personal safety, but whose assistance is greatly appreciated.This group includes students, past and present government officials, law enforcement personnel, and journalists.We would like to acknowledge the many newspapers and periodicals that opened their files to us, including Far Eastern Economic Review, LaMarsedlaise, Lao Presse, Le Monde, Le Provencal, and the South China Morning Post. We are grateful to members of the press corps in HongKong, London, Paris, Saigon, Singapore, Vientiane, and the United States who shared their information and informants with us and gave us manyleads, some of which they themselves were unaware or unwilling to follow up. Among this group we would like to thank Simon Albury (BritishBroadcasting Corporation), T. D. Allman, Jacques Decornoy (Le Monde), Leo Goodstadt (Far Eastern Economic Re-view), Grace Helms (MilfordCitizen), John Hughes (Christian Science Monitor), and Peter Dale Scott.We were assisted in our research in London by Adrian Cowell and Cornelius Hawkridge and in Paris by Jean Chesnqaux, Phillipe Devillers,General F. Gambiez, Annick Levy, Guy Mor‚chand, Laura Summers, and Christine White. In the United States we were helped and advised byFred Branfman, James Boyd of the Fund for Investigative Journal-ism, Antonia Dul, Allen Ginsberg, Lawrence Litshultz, Professor Karl Peltzer ofYale University, and Virginia Lee Read. In Laos we are grateful to our interpreter, Phin Manivong, and our photographer/guide, John Everingham.Finally, we are most indebted to Elisabeth Jakab of Harper & Row, who, in addition to being a superb editor, was a constant source ofencouragement and inspiration. ...