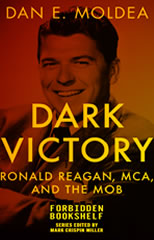 Prologue. President Ronald Reagan’s professional life-his acting career, his personal financial fortune, and his rise in politics-has been interwoven with and propelled by a powerful, Hollywood-based entertainment conglomerate named MCA. For nearly fifty years, Reagan has benefited both personally and financially from his association with this sixty-two-yearold company-formerly known as the Music Corporation of America-as well as from his close association with the firm’s top executives: Jules Stein, Lew Wasserman, and Taft Schreiber. Everyone involved has greatly profited from this relationship. MCA helped to make its client, actor Ronald Reagan, a multimillionaire; and the favors that were returned by Reagan, the former president of the Screen Actors Guild (SAG) and the former governor of California, have helped to transform MCA into a billion-dollar empire and the most powerful force in the entertainment world today. Reagan and his closest friends have portrayed and defended the president’s business transactions with MCA, which date back to 1940, as being totally above suspicion. But there remain numerous unanswered questions and allegations about the relationship between Reagan and MCA. These doubts raise delicate issues that involve possible personal and political payoffs-as well as links to major Mafia figures, particularly Beverly Hills attorney Sidney Korshak, who has been described by federal investigators as the principal link between the legitimate business world and organized crime. ...