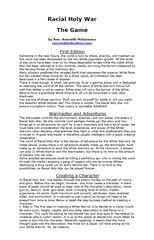 First Edition. Sometime in the near future, the world is torn by chaos, anarchy, and mayhem as the world has been devastated by the non-White population growth. All the lands of the world have been overrun by these despicable hordes while the noble White Man has been reduced to a tiny minority, barely surviving the terrors unleashed by the heinous forces of the malicious Jew. Many scholars predicted the ravaged Earth that oppresses the superior White Race but few yielded these concerns. As a direct result, all civilization has been destroyed in a fiery blaze of disaster. There is hope though. A small, yet growing, force is gaining power and is dedicated to cleansing the world of all the vermin. This band of White Warriors knows full well that defeat is not an option. Either they will carry the banner of the White Race to form a grandiose White Empire or all will be consumed in cold, dark blackness. You are one of those warriors. Shall you arm yourself for battle or will you watch the beautiful White Women die? The choice is simple. The Racial Holy War will ensure triumphant victory. That victory is inevitable. RAHOWA ! ...