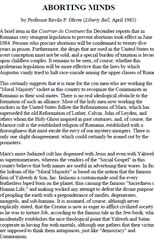 A brief item in the Courrier du Continent for December reports that in Romania very stringent legislation to prevent abortions took effect in June 1984. Persons who procure abortions will be condemned to twenty-five years in prison. Furthermore, the drugs that are used in the United States to avert conception must not be sold, and a special burden of taxation is levied upon childless couples. It remains to be seen, of course, whether this proletarian legislation will be more effective than the laws by which Augustus vainly tried to halt race-suicide among the upper classes of Rome. This certainly suggests that it is time for the con men who are working the "Moral Majority" racket in this country to recognize the Communists in Romania as their soul-mates. There is no real ideological obstacle to the formation of such an alliance. Most of the holy men now working the suckers in the United States follow the Reformations of Marx, which has superseded the old Reformation of Luther, Calvin, John of Leyden, and others whom the Holy Ghost inspired in past centuries, and, of course, the Marxist cult is the established religion of Romania, established with a thoroughness that must excite the envy of our mystery-mongers. There is only one slight disagreement, which could certainly be ironed out by the promoters. Marx's more Judaized cult has dispensed with Jesus and even with Yahweh as supernumeraries, whereas the vendors of the "Social Gospel" in this country believe that both names are useful in advertising their wares. In fact, the hokum of the "Moral Majority" is based on the notion that the famous firm of Yahweh & Son, Inc. fashions a custom-made soul for every featherless biped born on the planet, thus causing the famous "Sacredness of Human Life," and making wicked any attempt to defeat the divine purpose of peopling the earth with a preponderance of misfits, degenerates, mongrels, and sub-humans. It is assumed, of course, although never explicitly stated, that the Creator is now as eager to afflict civilized society as he was to torture Job, according to the famous tale in the Jew-book, which incidentally establishes the nice theological point that Yahweh and Satan cooperate in having fun with mortals, although one gathers that their victims are supposed to think them antagonists, just like "democracy" and Communism. ...