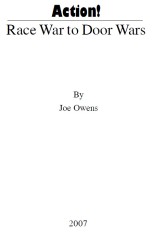 I first thought of writing a book when I read, No Retreat, by Dave Hann and Steve Tilzey, a so-called day-to-day account of their fight against the far right. I didn’t think much of their book, and as always with the ‘antifascist’ left, they give a distorted view of the far right. They try to pass us off as a bunch of moronic thugs, which is just not the case. They also never seem to get beat in the book, or take a hiding. Strangely, they don’t mention me or the trouble I gave the left during the 1980s, when Tilzey and Hann were at the forefront of ‘anti-fascism’. I can’t believe Tilzey and Hann were unaware of the bother I caused the left in the 1980s. No one on the far right in the UK had written a book giving a history of the fight we took to the far left. So, I decided to write a book and tell our side of the story. Firstly, I’m not a deranged psycho who goes out beating people up on a daily basis and drawing some twisted thrill from this. I am much more complex than that, and I have only reacted to situations in which I have found myself. I have never used violence or robbery against the law-abiding decent folk of this country and never intend to. I would go to the aid of any person suffering at the hands of the scum that prowl our city streets nowadays. I always remember what my karate teacher, Terry O’Neil, told us during training - “Never leave good people who are being attacked on the street.” This has remained instilled in me always. I have found in the traditional martial arts’ ethos and the nationalist outlook value systems to live by. Not that I haven’t been violent – but only to people who have deserved it. In politics, we had no alternative but to defend ourselves from very violent, vicious left-wing mobs. Had we not done so, our political existence would have come to an abrupt end. We would have been on the receiving end of their ‘violence’. The left were the ones who started this, by attacking our marches, meetings, paper sales, etc. What were we supposed to do? I hated them then, and would have been prepared to shoot every last one had a nationalist government come to power. I’m not so extreme as that now – I’d settle for giving them a packed lunch and parachute, then kicking them out of an aeroplane over Rwanda or the Congo. They could have all the diversity they wanted there! Remember, this was a political war we were involved in. We saw things in the same way as our opponents: our side was right. I will not condemn any violence that was committed against those Red traitors, and I’m sure they think the same about us. My work on the club scene has to be looked at, and judged, as someone doing a job – like the police or army. I don’t believe all police officers take a great delight in spraying C.S. gas in people’s faces, but a twisted one per cent may. There may be bully bouncers on the doors who get their kicks kicking seven shades out of drunks, but that doesn’t mean to say I did – I certainly didn’t. I was doing a job in very violent, dangerous conditions. I never went out of my way to hurt punters who entered the clubs where I worked, completely the opposite. I defy anyone to say otherwise… There were plenty into whose horrible faces I shoved knives and bottles before they shoved them into mine. Rightly so – these were not your average punters, but very violent men who could only be dealt with in this way. I don’t regret one minute of these actions and never will. All these violent bullies who were glassed, stabbed or had other violence dished out to them deserved what they got. All their lives they were dishing out similar treatment to harmless people, until they met someone who paid them back in their own coin. I’m neither proud nor ashamed of any violence I’ve had to use on these rats – I was responding to the very violent environment in which I found myself. I am not a £100,000 a time hit-man for anyone, let alone drug barons. The people I’ve been wrongly accused of killing lived their lives in a very violent and murderous fashion, finally succumbing to the very violence that had swirled around them all their lives. They entered an arena where violence and death were the game, and finally faced defeat. When you have lived your life in such a fashion, you can’t start complaining when it doesn’t go the way you want. Sadly, in the worlds of both politics and gangland, I’ve came across plenty who could dish it out, only to go crying to the police when on the receiving end. I don’t intend to reinvent myself in this book, nor portray myself as other than I am. I will give an unvarnished account of how I’ve lived my life. I can’t turn back the clock, and to be honest I’ve had one hell of an exciting life, a few ups and downs, but exciting all the same. I don’t recommend the (non-political) aspects of this life to anyone. I’m quite lucky to be still alive – plenty I know are either dead or locked up for good… But when all’s said and done, nature equipped me for this life, and how can you go against nature ? ...