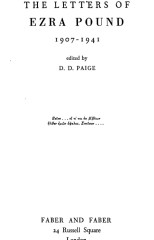 If Pound had any reputation as a letter-writer before 1915, and he probably had, it was a private reputation amongst (his) friends. When in that year Harriet Monroe printed a few of his letters in Poetry (Chicago) as hints to youthful talents, she made public another aspect of his genius. His correspondence immediately began to acquire, deviously and, as it were, subterraneously, an enviable reputation. It grew alike privately and publicly, fed in the former instance by the passing about of letters and in the latter by their scrappy publication in literary magazines, until it became for about five years nearly as well-established as his legitimate reputation. ...